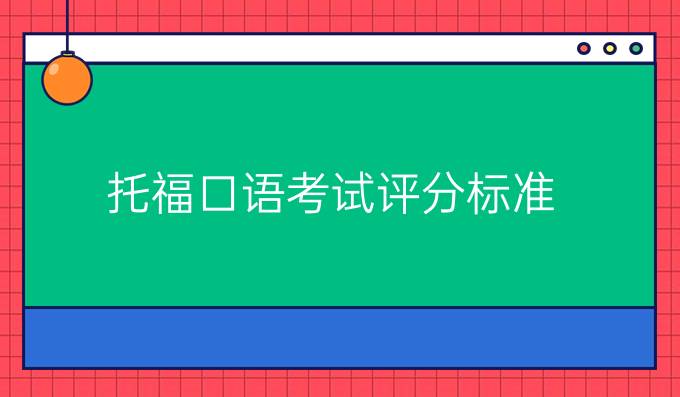 新托福口语评分标准：Score：4
General Description: The response fulfills the demands of the task, with at
most minor lapses in completeness. It is highly intelligible and exhibits
sustained, coherent discourse. A response at this level is characterized by all
of the following.
Delivery: Generally well-paced flow (fluid expression). Speech is clear. It
may include minor lapses, or minor difficulties with pronunciation or intonation
patterns, which do not affect intelligibility.
Language Use: The response demonstrates effective use of grammar and
vocabulary. It exhibits a fairly high degree of automat city with good control
of basic and complex structures (as appropriate). Some minor (or systemic)
errors are noticeable but do not obscure meaning.
Topic Development: Response is sustained and sufficient to the task. It is
generally well developed and coherent; relationships between ideas are clear (or
clear progression of ideas).

新托福口语评分标准：Score：3
General Description: The response addresses the task appropriately, but may
fall short of being fully developed. It is generally intelligible and coherent,
with some fluidity of expression though it exhibits some noticeable lapses in
the expression of ideas. A response at this level is characterized by at least
two of the following.
Delivery: Speech is generally clear, with some fluidity of expression,
though minor difficulties with pronunciation, intonation, or pacing are
noticeable and may require listener effort at times (though overall
intelligibility is not significantly affected).
Language Use: The response demonstrates fairly automatic and effective use
of grammar and vocabulary and fairly coherent expression of relevant ideas.
Response may exhibit some imprecise or inaccurate use of vocabulary or
grammatical structures used. This may affect overall fluency, but it does not
seriously interfere with the communication of the message.
Topic Development: Response is mostly coherent and sustained and conveys
relevant ideas information. Overall development is somewhat limited, usually
lacks elaboration or specificity. Relationships between ideas may at times not
be immediately clear.

新托福口语评分标准：Score：2
General Description: The response addresses the task, but development of
the topic is limited. It contains intelligible speech, although problems with
delivery and/or overall coherence occur; meaning may be obscured in places. A
response at this level is characterized by at least two of the following.
Delivery: Speech is basically intelligible, though listener effort is
needed because of unclear articulation, awkward intonation, or choppy rhythm
pace; meaning may be obscured in places.
Language Use: The response demonstrates limited range and control of
grammar and vocabulary .These limitations often prevent full expression of
ideas. For the most part, only basic sentence structures are used successfully
and spoken with fluidity. Structures and vocabulary may express mainly simple
(short) and/or general propositions, with simple or unclear connections made
among them (serial listing, conjunction, juxtaposition).
Topic Development: The response is connected to the task, though the number
of ideas presented or the development of ideas is limited. Mostly basic ideas
are expressed with limited elaboration (details and support). At times relevant
substance may be vaguely expressed or repetitious. Connections of ideas may be
unclear

新托福口语评分标准：Score：1
General Description: The response is very limited in content and/or
coherence or is only minimally connected to the task, or speech is largely
unintelligible. A response at
this level is characterized by at least two of the following.
Delivery: Consistent pronunciation, stress, and intonation difficulties
cause considerable listener effort; delivery is choppy, fragmented, or
telegraphic; frequent pauses and hesitations.
Language Use: Range and control of grammar and vocabulary severely limit
(or prevent) expression of ideas and connections among ideas. Some low level
responses may rely heavily on practiced or formulaic expressions.
Topic Development: Limited relevant content expressed. The response
generally lacks substance beyond expression of very basic ideas. Speaker may be
unable to sustain speech to complete task and may rely heavily on repetition of
the prompt.