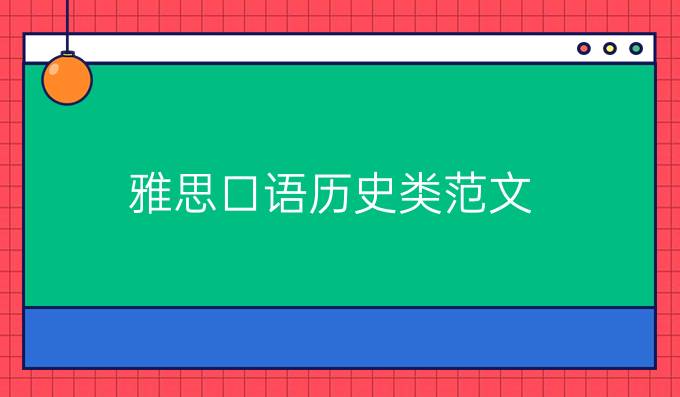 Describe a historical period that you are interested in.

How you got to know it

Things happened during that historical period

And explain why you find it interesting

Do young people like historical stories in your country?

Which historical period do you think is the most important in your country?

Do you think history matters in a country’s future development?

Why should we learn history?

I am a big fan of Chinese history. The major events that happened from the first dynasty, Xia Dynasty, to the last dynasty, Qing Dynasty have been acknowledged by myself. But there is one dynasty that have attracted me since I was young. It was the Tang Dynasty.

My first vague impression of Tang Dynasty is from the stories my mom told me when I was very young. At that time, my mom always told me the stories about Zetian Wu, the first and the only woman emperor in Chinese history, such as how she escaped from the temple when her first husband died, how she became the queen of the country and how she used strategies to let ministers bend over in front of her. These exciting stories grasped my curiosity to dig more about the Tang Dynasty. Therefore, I started to read historical books to involve myself in this period. Xuanwu Gate incident, the power battle between Princess Taiping and Longji Li, and the love story of Longji Li and Lady Yang are all the splendid events that describe the royal life at that time.

What makes these stories fascinating and attractive is the royal family’s struggle between power and family love. Everyone in these historical events would hesitate to defeat or kill their relatives. People involving themselves into these big events always thought about the value of what they were doing. Sometimes readers could even understand their inner heart and think what they have been thinking all the time. Love in exchange for power or power in exchange for love are just two choices of their own heart, but the endings might be so different than the original decisions. That’s what I find interesting about these stories, cruel but sometimes mixed with warmth.